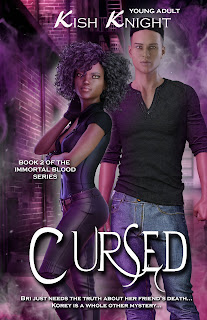 Cursed was just sent to my beta reader

Bri should have known that her life couldn’t be simple. Between burying her best friend and getting closer to the bad boy who showed up at the gravesite, her life has taken a serious left turn. The dark creature who hounded Arielle to her death has now developed a dangerous fixation with Bri. Bad boy Korey is the only person that she can talk to, but Bri can’t figure out if he’s on her side or if he’s part of the darkness. Not to mention that Bri’s clock is ticking down as she races to find a lost immortal in a town riddled with secrets, even as her body begins to succumb to the effects of the curse.

The deeper Bri probes into Arielle’s sudden death, the more she uncovers the buried sins of a secret society. Since she doesn’t know who to trust, she has to start tracing the old steps of the missing immortal, in hopes of finding new answers. But as she gets closer to the truth, she has to wonder if anyone in her circle is at all what they seem.

Posted by KKnight at 2:29 AM No comments:

The boys??? (borrowed from the Rise of the Elites blog)

(I'm borrowing this post from my section on the Rise of the Elites website...we're gearing up and winding down those manuscripts, heading toward editing, and racing toward those 2021 release dates!  I wrote a little post over there about my beginning stages of writing, and then threw in a FREE excerpt on top of it.  ENJOY!)

One of the weirdest things about my journey as an author has definitely been my choice of gender perspective.  When I first began writing (meaning my first full-length book project, NOT anything written in high school or before), I was in college.  I started writing a novel called Second Chance about young man who ended up being dragged to another world.  Over the next few years, as I undertook my personal writing projects, I would discover that my initial instincts were to craft male main characters.  Strange….

(I never figured out why…..certainly wasn’t what I read in my growing up years, since I read an equal number of female MC and male MC books.)

I’ve even gone as far as to draft a novel with the main character as male, and then completely RE-WRITE the novel with the MC as a female.  (Am I nuts????)

So again, why is that?  Again, I still don’t know why my brain does that HOWEVER, I will say that I initially considered making Dix (Rise of the Elites Book 6) a male character.  I decided against that early on and made Dix my awesome female MC, but brought in my equally awesome male secondary character Remiel.  (Remiel is the old Elite’s brother.)

Now given my love of male main characters, let’s hope that I can give the readers an awesome version of Remiel.  Check out this excerpt with Remiel and Dix below:

Without a word, Remiel rose from his seat and approached my throne.  His tall frame made me the slightest bit unnerved.  All of the Irin were tall by nature, but for some reason, Remiel and his brothers stood taller than the rest of us, easily past seven-feet tall.  Anael, rest his soul, had stood at a solid eight-feet.

"Approach," he commanded, his tone leaving no room for argument.  Quickly, I closed the distance between me and Remiel.

At his side, he held a glowing sword and I recognized it as one of the seven heavenly blades rumored to have been forged by the first Angel's hands.

With the barest touch, Remiel tapped the base of my throat and then slowly slid the sword down along my skin.  The sword slid down easily, passing evenly through the material of my armored halter, and only came to rest at my bellybutton.

Even as lightly as he drew the blade down, a trail of sparks were tossed in the air behind it.

"From chest to sternum," I mouthed, knowing the old chant.

But the sparks left behind had been more than just show; as soon as the metal touched my bellybutton, the little flickers combusted into large bursts of flame around me, creating a fiery ring in the air.

A thin line of blood followed the long scrape down my body, and I looked down at myself in surprise, realizing that for the first time in my adult years, I was feeling pain.  Angels didn't experience minor pain, of course, but we knew what it was from our formative years in training.

Fellowship of the Last Fallen

Fellowship of the Last Fallen 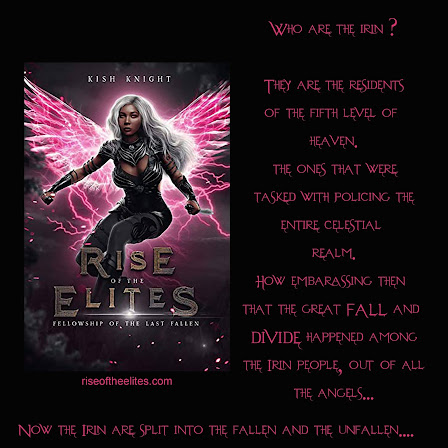 Posted by KKnight at 9:45 PM No comments: