I know that at least some people have read Fury Rising and are waiting for the follow-up book Fury Born.  In case you missed the announcement, Fury Born will be released by November 2020. 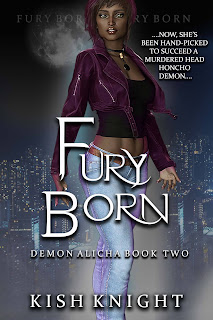 So, what comes next for Alicha and her sudden team of ‘former-rivals-turned-partners’?  We’re now finished with the immediate threat of the Fury Megaera (or so we’re hoping), and we’ve uncovered an underground plot by Demon Prince Tevit.  But where does this leave Alicha?  Her world has been turned upside-down….bringing in a host of new problems.  Just to point out, even though she’s liberated herself from Tevit, now she has gotten caught by Zepar, who is just as bad.

In Fury Born, Alicha awakens to find that a bounty has been placed on her head by the Hunters, and the IRTC (International Realm Treaty Council) has issued yet another warrant for her arrest.  The only way for her to escape being detained by the Council is to discover the reason behind the Fury Tisiphone’s murder and provide the proof to the Council.

Problems exist with that because every inhabitant of the Hell Realm, whether in or out, is on high-alert after the death of the great Fury.  Not to mention the fact that while Marco and Alicha took their cautious relationship to another level in Fury Rising, Alicha is finding it near impossible for them to be together in Fury Born.  As she rises in rank in the demon world, Marco is also gaining more power in the world of the demon hunters.  Each day brings her closer to him actually finding out what she is….  Sean is also becoming an unexpected obstacle as well, as he continues to express his interest in winning Alicha’s affections.  With Sean’s fortitude and connections in the demon world, he might actually be a better match for her than Marco…..but readers, do we really want that???

There will be a third and final book to follow (at least, that’s how I’m planning it right now).

I appreciate you readers so much.  Being a reader myself, I know the excitement that a fun story can bring.  At the moment, though, all of my reading is on hold, while I sweep four writing projects off of my desk and push them into the publishing world.

Back soon with more about upcoming projects!  Again, thank you so much for allowing me to write for you.

Posted by KKnight at 3:28 AM No comments:

MY cover REVEAL for the Rise of the Elites COllection!

From the shadowy world behind the clouds, meet Dalquiel AKA Dix... 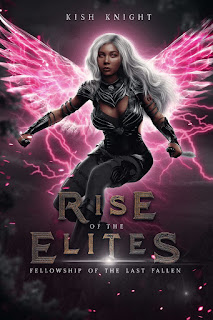 Under the threat of everlasting fire, the Fallen and the Unfallen must unite…
Or die.
Long exiled from the heavens, Dix knows her place as ‘one of the Fallen’, so when two Archangels show up on Earth to take her back to Fifth Heaven, she’s stunned. And whether she wants the job or not, she’s been chosen as the next elite.
With rogues wreaking havoc, and the higher-ups releasing the slow-burning flames to destroy their shadowy world among the clouds, the Angels need her help. But as she takes her position as Elite, the Council she thought would guide her have abandoned their post in protest of her coronation.
To make matters worse, the old Elite’s sexy brother has come to her with a secret matter that could get them both cast into the flames. Can she juggle her responsibilities and keep her people safe along with her heart?
Fellowship of the Last Fallen is a part of the Rise of the Elites Shared World Collection
Collection includes titles by:
USA Today Bestselling Author, Jessica Cage
Delizhia Jenkins
USA Today Bestselling Author, Jennifer Laslie
USA Today Bestselling Author, Mikel Wilson
E. M. Lacey
Kish Knight
USA Today Bestselling Author, K. R. Fajardo
Seven Elites will Fall. Seven will Rise.
Find out if they survive.
https://www.riseoftheelites.com/fellowship-of-the-last-fallen
Posted by KKnight at 5:43 PM No comments:

Urban Fantasy - Rise of the Elites

Hey y'all!  So, this shared world collection of books will start releasing in March 2021, so look out for that... for NOW, the covers have been being revealed each week (on Mondays).

ANOTHER RELEASE IS COMING!

Y'all ready for Monday??? Next 'Rise of the Elites' cover reveal ! 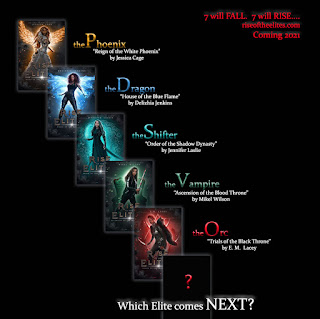