Book Release on Cyber Monday!!
$0.00 SALE on Amazon.com
(ending on Wednesday)
Geek to Diva in 20 seconds 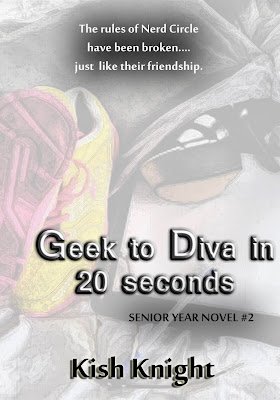 The first book, Geek - Boy Equals..... ends really abruptly, and I am sorry for that (sad face).  However, that was by design, as the second book follows right on the heels
of the first.

So, the next book, Geek to Diva in 20 seconds, will be released less than a week behind Geek - Boy Equals....


I would have loved just one book, but the entire saga is lengthy, and completely too much for a single ebook.
Enjoy!
Posted by KKnight at 9:27 PM 1 comment:

FINALLY FREE for Black Friday
(or at least the weekend) 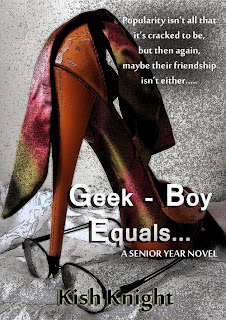 Sorry for the mix-up!
Posted by KKnight at 2:35 AM No comments: 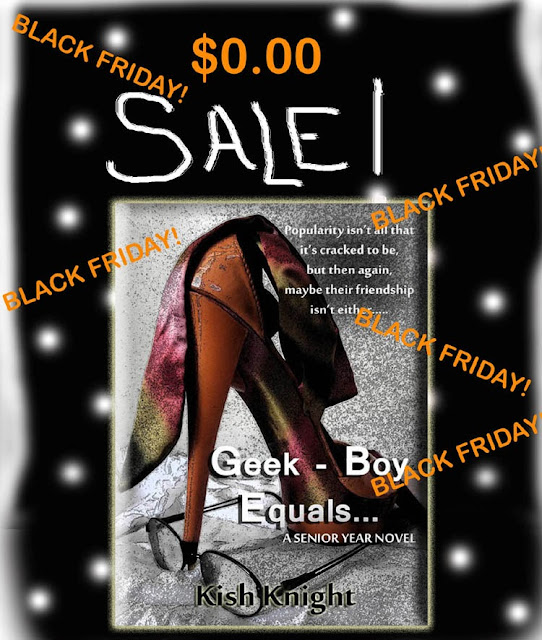 If you’ve been following me on Wattpad, where I release all of my Chick-Lit novels for THE FREE, then you’ve been keeping up-to-date with the Geeks saga.
Well sorry, guys, but I got impatient.

So for Black Friday, I am releasing the entire book, also for THE FREE, on Amazon.com!

Meaning, you don’t have to wait for Chapter by Chapter, if you grab it on Black Friday, Saturday, or Sunday
(basically Black Weekend 2013).

Posted by KKnight at 7:00 AM No comments:

Sixteen-year-old Allie isn’t like other girls. Instead of spending her summer break sitting around on the beach, she takes the epic vacation of a lifetime.
Tornado chasing.
And she’s not disappointed. Just a few miles from the town of Evansburg, Nebraska, Allie meets her dream of seeing a tornado. In person. She can’t wait to tell her friends back home. Never mind that her parents are going to kill her.
But her dream soon turns into a nightmare, and a strange event leaves her shocked. Confused. When she returns home to Wisconsin, something’s…different. Allie now bears a curse so awful, it could destroy everyone and everything she’s ever known.
With her best friend, Tommy, Allie must return to the plains to find a way to reverse it. She enters a world that she had never imagined, where she becomes a pawn in a fight to save the people of Evansburg from her fate…or to destroy them.

Holly Hook is the author of the Destroyers Series, which consists of five young adult books about teens who are walking disasters…literally. She is also the author of the Rita Morse series, a young adult fantasy series still in progress, and After These Messages, a short ya comedy. Currently she is writing Twisted, a spin-off of the Destroyers Series due out in December. When not writing, she enjoys reading books for teens, especially ya fantasy and paranormal series with a unique twist. Website Facebook Twitter Goodreads
Posted by KKnight at 11:23 PM No comments:

So, I finished moving and among my satchels of keepsake pages (as all writers have), I found a piece of cardstock that has been a flagship for me.  It was some hasty advice that I jotted down years ago, advice from Editor Anica Rissi.  I read it somewhere once, and it made such an impact, that I wrote and saved it.
See: 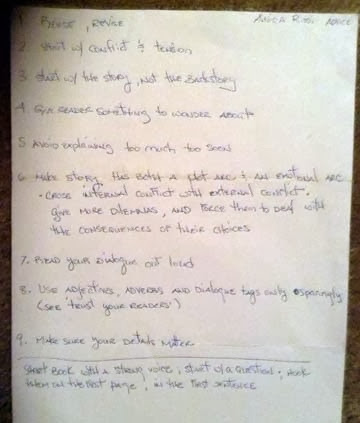 So, in case you can't read my handwriting scribble, these are the GOLDEN words:

1) Revise, revise
2) Start with conflict and tension
3) Start with the story, not the backstory
4) Give reader something to wonder about
5) Avoid explaining too much, too soon
6) Make sure story has both a plot arc and an emotional arc ie. (cross internal conflict with external conflict. Give more dilemnas, and force them to deal with the consequences of their choices)
7) Read your dialogue out loud
8) Use adjectives, adverbs, and dialogue tags only sparingly (trust your readers)
9) Make sure your details matter

Posted by KKnight at 6:01 PM No comments:

It's so good to be bad....oops....back!  Moving takes up all your time..(ahem)....writing time, but the worst is that you have ZERO online connectivity!!!

Well, Kish is here now.
Posted by KKnight at 3:17 PM No comments: