So I spoke with Author Adrienne Reiter on the release of her book, Twist, the first from her
Rebecca Ashley series. 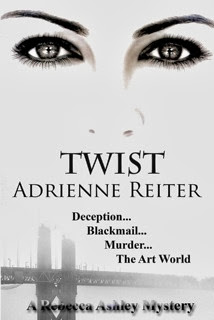 1) Was writing always your dream? I’ve been putting pen to paper ever since I can remember. I was always telling stories. Even before I could write I would draw picture boxes to describe scenes. The first thing I wrote for an audience was a play I had my cousin and I perform for our family Easter Sunday. It was about two girls finding a baby on the beach. They try to find its mother and then discover they’ve been carrying a dead baby throughout the play. My family still talks about it. 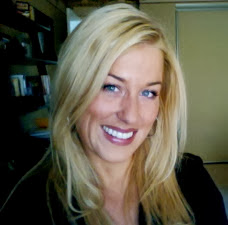 2) What was the greatest thing you learned at school in regards to writing? The greatest thing I learned in school is also one of my favorite things about writing. There’s no right or wrong way to write. Everyone crafts a story differently.

3) What current book or book series are you known for? TWIST is the first book of my Rebecca Ashley Mystery Series and is about a down on her luck, newly divorced art student Becca (Rebecca Ashley) who is taken under her professor’s wing. Shortly after Becca moves into her professor’s live/work loft her professor is murdered. Becca is then thrust into the underground world of black market art and artifact smuggling. The mystery surrounds a mysterious dark object Rebecca has to find or suffer her professor’s same fate.

4) What is a typical working day for you?  When and where do you write? I try to write at least five pages a day. I don’t read over a first draft until I’ve reached the end. I have writers ADD, which can be own special kind of writers block. Working on multiple projects at a time helps me avoid burnout. The northeast corner of my living room is my writing studio where I get most of my work done. I write mostly in the evenings and early mornings right when I wake up. Pretty much whenever the moment takes me.

5) So, you're a mystery novelist.  Is that your fave genre all around, or just for writing?  What genre do you prefer to read? I love crafting a story that takes readers on a rollercoaster ride. ‘Who done its’ are fun to plot point. I think writers write best in the genre they most enjoy reading. I grew up watching mystery theatre on KPBS and at a young age graduated from Nancy Drew to Agatha Christie. In college and just recently again I got into Raymond Chandler, Dashielle Hammond and Ross Macdonald.

6) Do you ever see yourself as one particular character in your novels?  If so, which one? I’ve been asked how much my protagonist in my Rebecca Ashley series and I have in common. I think all writers put bits of ourselves into our protagonists so some if my writing is unintentionally autobiographical. They say to be a good writer you have to first go out and live. I’ve definitely done that. Ha.

7) What question have you always wanted to be asked in an interview?  How would you answer that question? Is that your real hair color? Just kidding. What I want to be asked the most is Will you be writing sequels? How many?
‘The Rebecca Ashley Mysteries’ is a three part series. I’m almost finished with the first draft of TWIST’s sequel ‘CHOSEN’. I’ve loosely outlined the third book ‘BORDER LAND’.  Last September I wrote the first draft of a mystery featuring a different sleuth for the International Three Day Novel Contest. I’m already anticipating making that into another series. I won’t want for writing ideas for a awhile.

8) What was the greatest thing you learned that helped you write the life-story of your characters? I think any story that relates to readers is a good story. I appreciate good character development that sends a message. I’ll take seemingly uninteresting characters, throw adversity at them and find out they’re actually extraordinary. Like I mentioned above, I agree with the saying that “A good writer has gone out and lived.” The characters I’ve met in real life through work and travel helped me develop my characters on the page.

9) Alrighty now, just to wrap it up, one last thing.  This is the trademark of this blog. What's your favorite bedtime drink? Cocoa, soda, wine?  Inquiring minds  want to know, please.  (Don't worry, you can answer 'water,' if you don't want to say (lol).  A Hot Toddy is my favorite bedtime drink. It’s hot water, lemon, honey and two fingers of scotch.

Thanks, Adrienne, for stopping by the blog!
Posted by KKnight at 3:57 AM