Excerpt from Dawning:
(Dawning (Book 3 of the Returned series novel) is almost here! May 1, 2018....
Sionne's story is finally coming to a close.) 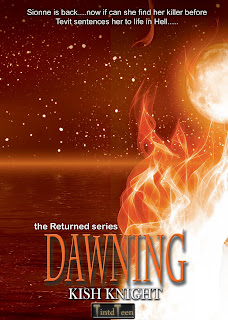 But no sex had made Katse a cranky demon, and instead of repeating himself, he simply turned all the way around to face her.  Before he turned away from me, I glimpsed the look that was all for her.  Actual flames danced in his eyes, licking at his eyelids menacingly, while his lips curled back just slightly, just enough to see sharp teeth glistening.


The girl shrieked and scrambled off the bed, tangling herself in the bedsheet in the process.  Finally free, she dashed for the door, wearing what I assumed was her best lingerie set.  Guess she hadn’t known that he was a demon.  He’d probably forgotten to mention it.


Then we were alone in the chilly hotel room.  Katse stared at me as if he wanted to demand the whole story, but he didn’t need to.  I’d just given him all of my memories, and whatever I knew, he knew.


“So basically you’re saying that Taryn killed you, but since you broke your link to Tevit, our master, you have no way to tell him to spare Taryn from eternal judgment, since you’re currently trapped inside her body?”